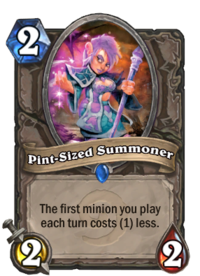 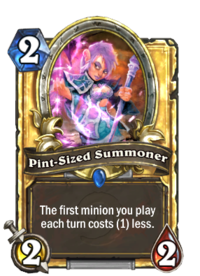 The first minion you play each turn costs (1) less.

She's quite jealous of the Gallon-Sized Summoner.

Pint-Sized Summoner is a rare neutral minion card, from the Classic set.

Example: You cannot play Pint-Sized Summoner and then receive the discount on another minion in the same turn, since that minion will be the second minion played that turn.
Example: Obtaining a Pint-Sized Summoner through a summon effect such as Piloted Shredder or taking control of one through an effect like Shadow Madness will immediately grant the player the discount, provided they have not yet played a minion that turn.
Example: Suppose that you control Pint-Sized Summoner and Mechwarper and have not played any minion this turn. A Clockwork Gnome and an Argent Squire in your hand will both display a mana cost of 0. If you play Argent Squire first, Clockwork Gnome will still cost you 0 mana due to Mechwarper. If you instead play Clockwork Gnome first, Argent Squire will then cost you 1 mana.
Example: If you already control two Pint-Sized Summoners, a 4-mana Chillwind Yeti costs 2 mana to play first in a turn, after which the effect will not apply again that turn. If instead a 1-mana Flame Imp is played first, it will cost 0, after which the effect will not apply again that turn.

Similar to the warlock's Summoning Portal, the Pint-Sized Summoner is used to bring minions onto the field at a discounted mana cost. It can be used to bring out an expensive tough monster early or make a cheaper one completely free. Unlike the Portal, this minion has an attack value and can also be used for the simple purpose of causing damage. It also has the added benefit of being usable by any hero's deck. Works well with Stealth for prolonged use.

The card shows a generic gnome mage. The gnomish race is well-known for their radical technology, magical curiosity, and cute off-colored hair. 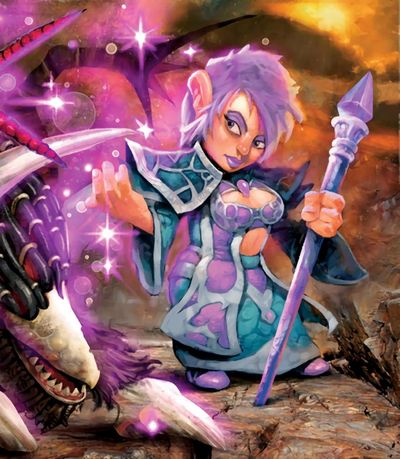