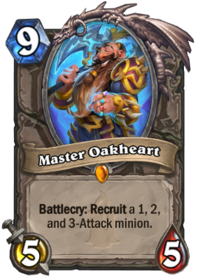 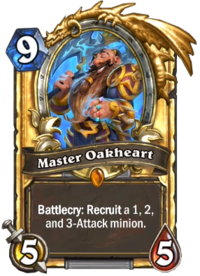 Master Oakheart is a legendary neutral minion card, from the Kobolds & Catacombs set.

Master Oakheart can be obtained through Kobolds & Catacombs card packs, or through crafting.

Master Oakheart is best used in a deck where your potential 1, 2 and 3-Attack minions have large Health or powerful effects to offset their weak Attack. These include minions like Tar Creeper, Tar Lurker, Tar Lord, Drakkari Enchanter, Bolvar, Fireblood, Alley Armorsmith, Dirty Rat, Dragonhatcher, Al'Akir the Windlord, Voidlord, Blackguard, and Hadronox. By strategically including minions with 3 attack or fewer such as these, you can ensure that Master Oakheart provides massive value as soon as he's summoned.

Master Oakheart is unique to Hearthstone. A dwarven member of the Guild, he is an old friend of Marin the Fox. When a group of adventurers failed to retrieve the fabled axe Woecleaver, Oakheart asked Marin for help in obtaining the weapon. Marin asked how much the venture would pay him; it didn't pay anything, but Oakheart had heard a rumor that Woecleaver was stashed with another treasure that Marin had been searching after for some time - a large chest said to contain items of "particular interest" - which managed to convince the Fox to agree to the undertaking.[1]