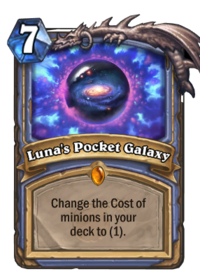 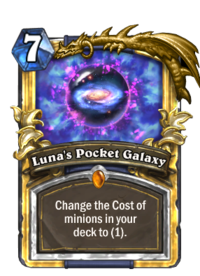 Change the Cost of minions in your deck to (1).

Luna became head of the astronomy department when her boss invented the Pocket Black Hole.

Luna's Pocket Galaxy can be obtained through The Boomsday Project card packs, or through crafting.

Luna's Pocket Galaxy is a card that does nothing when played, but the tempo loss is made up by its potentially huge mana discount. In thrives in decks that run a good number of large minions and good card draw and allows combos that aren't normally possible. It can also be used as a combo setup for Malygos, Alexstrasza, or Archmage Antonidas to allow following up with more spells.

It's possible to avoid the massive tempo loss from playing this card by replicating its effect with Tortollan Pilgrim. While this leaves Luna's Pocket Galaxy a dead draw, it will tutor for the card and summon a 5/5 body alongside. You can also reduce its cost with Naga Sand Witch to lessen the tempo loss.

My colleagues are consumed with paltry, material things. Resources. Power. Food. Sleep. Distractions! Why waste precious time on such things when the vast riddle of the heavens is written above, waiting to be unraveled? And controlled!

No, you insolent instrument. It’s not finished. There are still some irritating dimensional quirks to be resolved. But . . . if Boom can divert some funding, recruit more interns, and send over a few of your metal friends to help round up the strange creatures that keep appearing in my laboratory, I’m sure we’ll finish in time for whatever it is he’s planning.[1]