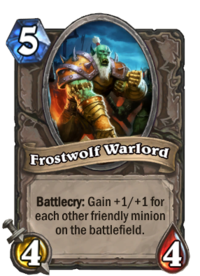 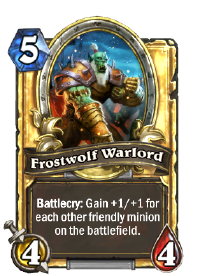 Battlecry: Gain +1/+1 for each other friendly minion on the battlefield.

The Frostwolves are locked in combat with the Stormpike Expedition over control of Alterac Valley. Every attempt at peace-talks has ended with Captain Galvangar killing the mediator.

Frostwolf Warlord is a neutral minion card, from the Basic set.

Two copies of Frostwolf Warlord are automatically included in all players' collections upon unlocking the shaman class.

Two Golden copies of Frostwolf Warlord are a reward for raising a shaman to levels 53 and 54.

Frostwolf Warlord is uncraftable and cannot be crafted or disenchanted.

Frostwolf Warlord therefore has great synergy with decks that can focus on large numbers of usually smaller minions. Paladins and shamans especially can make great use of it with their hero powers. Specific card synergy examples include Imp Master, Razorfen Hunter, Murloc Tidehunter, Dragonling Mechanic and Snake Trap.

Attack
For the Horde!

The Frostwolf clan is one of the original orc clans from the planet of Draenor, and one of very few clans not to partake of the Blood of Mannoroth which corrupted the other clans. Today, the Frostwolf clan hopes to retake Alterac Valley from the relic seeking Stormpike Guard dwarves.

Eitrigg is an aging Blackrock orc warrior and veteran of the First and Second War. After an encounter with Tirion Fordring, the two warriors came to respect each other and later became friends despite the animosity between their two races.

Currently, Eitrigg serves the Horde as an advisor to the Warchief. His wise counsel is considered valuable by Thrall, but disregarded by Garrosh Hellscream. He also joined Tirion in the Northrend Campaign as commander of the Argent Crusade's Zul'Drak division. 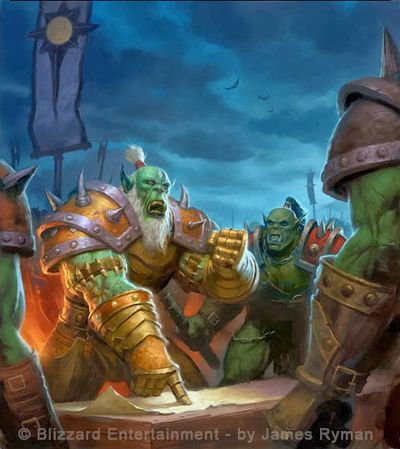