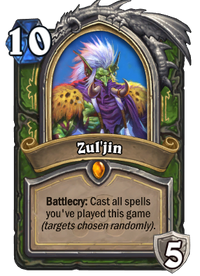 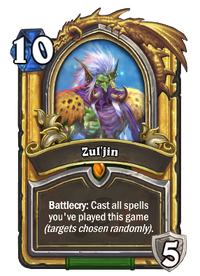 For the boss of the same name, see Zul'jin (boss).

Zul'jin is a legendary hunter hero card, from the Rastakhan's Rumble set.

Zul'jin can be obtained through Rastakhan's Rumble card packs, or through crafting. 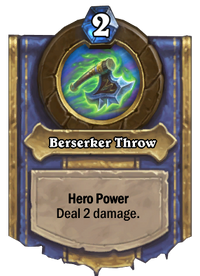 Zul'jin is a hero card where all the power is placed on its Battlecry. Its power rivals that of Yogg-Saron, but much less chaotic. Since it only plays spells that you have played - not to mention it's impossible to have the Battlecry prematurely end - you have much more control over the outcome. Zul'jin is a natural fit for Spell Hunter decks, effectively almost doubling the value of your deck. Even in other decks, it's a powerful comeback card for filling your board with minions from Unleash the Beast or Animal Companion and reloading your hand with more cards from Secret Plan or Hunter's Pack, as well as replaying every Secret that's been activated. Removal spells are a bit less reliable with Zul'jin, since most of them can target friendly characters. To optimize Zul'jin's effect, your deck should have a balance of Secrets, minion and card generation, and removal. For example, you wouldn't want a board full of 1/1 Hounds from Unleash the Hounds to block two Animal Companions or risk Explosive Shot and Kill Command damaging yourself.

As quests are counted as spells, Zul'jin is also one of a very small set of cards which can guarantee a copy of your quest; this ability is only shared with Hex Lord Malacrass as of Rastakhan's Rumble.

While his Hero Power, Berserker Throw, isn't too flashy, it's nevertheless a straight upgrade from Steady Shot since it can also target minions. That being said, if you plan on also running Deathstalker Rexxar, play Zul'jin first whenever possible. 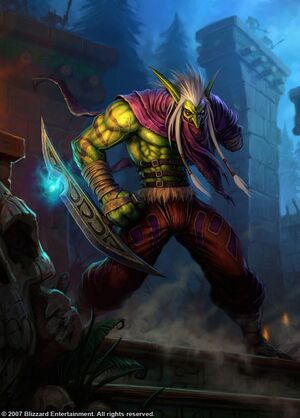 Zul'jin in Zul'Aman, as depicted by Glenn Rane on the Gods of Zul'Aman wallpaper.

Zul'jin (also spelled Zuljin) was the Warlord of the Amani forest trolls and chieftain of the Amani tribe since before the Second War. Zul'jin was a fierce enemy of the high elves, with whom he shared many years of conflict. Zul'jin and the Amani tribe were allied with the orcish Horde for the duration of the Second War, but Zul'jin himself was captured near its end by Halduron Brightwing, in whose custody he lost an eye and an arm, which he never regenerated. Upon gaining his freedom, he went into hiding to rebuild his army and plan an attack on the remnants of the high elves, now known as blood elves, only to find them allied with the reformed Horde. He was killed by Azerothian adventurers who raided Zul'Aman during the Invasion of Outland.

Zul'jin - styled as "Warlord Zul'jin" - used to be found as the final boss encounter of Zul'Aman in Ghostlands, the capital of the Amani tribe.

In Hearthstone lore, Zul'jin serves as the champion of Halazzi's Lynxes, the ferocious hunter team in Rastakhan's Rumble.

Warlord Zul’jin is reckless, bitter, and has a chip on his shoulder that’s even bigger than his blade. He is more than willing to unleash the primal power of Halazzi the Lynx loa upon his competitors, but he’s got a special knack for the mystical side of the hunt.[1]

Rikkar sympathized with Zul’jin. They had a surprising amount in common: they were both passionate, indomitable, and hungry for victory that always seemed just out of reach. Zul’jin never gave up fighting for the Amani empire, no matter how bad the odds. Or losing major pieces of his anatomy. If Zul’jin could keep fighting with one eye and one arm, how could Rikkar give up now, with two eyes and two whole arms?[2]