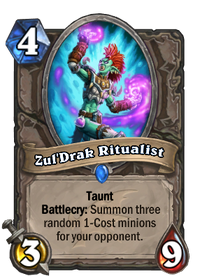 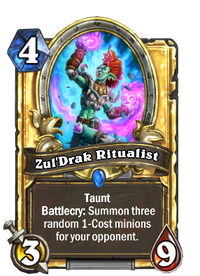 Generosity is a core value in cult culture.

Zul'Drak Ritualist is a rare neutral minion card, from the Descent of Dragons set.

Zul'Drak Ritualist is great for summoning weak minions to counter deck archetypes which revolve around resurrecting minions, such as Resurrect Priest and potentially Hadronox Taunt Druid. However, if used on its own as a Taunt, this card is a questionable replacement for Sen'jin Shieldmasta due to the relatively large number of 2-attack minions it can potentially summon, not to mention the possibility of the opponent buffing those minions and/or silencing/removing this card before using them to go face. Most 1-drops will die to the majority board clears, however, allowing it to be somewhat effective in tandem with cards like Consecration and Brawl. It also sees play in Gonk Druid to fill the opponent's board with weak minions and give bonus attacks with Gonk, the Raptor. It also has a synergy with the Recruit mechanic, especially with Oaken Summons.

Summon
Ooh, dis be some bad mojo.
Attack
Save the ritual! 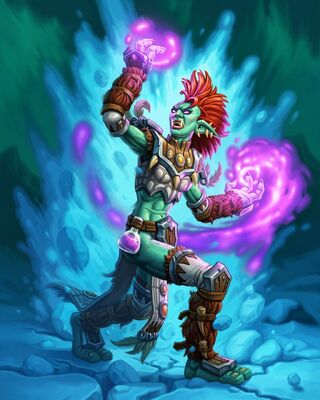