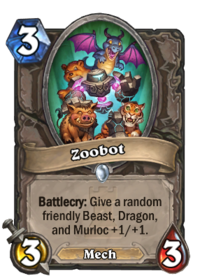 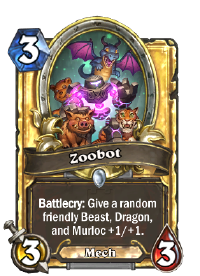 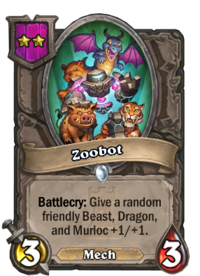 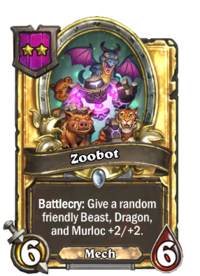 Battlecry: Give a random friendly Beast, Dragon and Murloc +1/+1.

The Murloc is taking the picture.

Zoobot is a common neutral minion card, from the One Night in Karazhan set.

Two copies of regular Zoobot are obtained by defeating the Curator, the first boss in One Night in Karazhan's third wing, The Menagerie.

As a Wild format card, both regular and golden versions of Zoobot can also be crafted for the following amounts:

This card augments the "actual zoo deck" theme of The Curator, providing a strong effect if the player is able to take advantage of it.

"Hello. This Curator is programmed for complete Menagerie management. It is this Curator’s duty to ensure the safety and well-being of all creatures within the Menagerie. The Menagerie spans an area greater than the geometric volume of this tower, and contains a constantly variable number of exhibits. Due to a large number of exhibits and extra-dimensional spaces, this Curator employs the services of several less advanced assistants to ensure 100% containment." - The Curator[1]

The Zoobot is a smaller and less advanced version of the Curator, designed to assist it in containing and maintaining the extensive range of exhibits within Karazhan's Menagerie. It is original to Hearthstone.