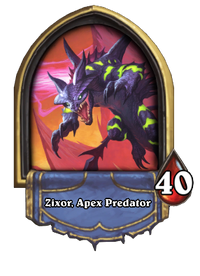 In the mushrooms of Zangarmarsh, our heroes save a second outcast.

For the minion card in Ashes of Outland set, see Zixor, Apex Predator.

Zixor, Apex Predator is the third boss encounter in Chapter 1: A World in Ruin of Trial by Felfire Story. 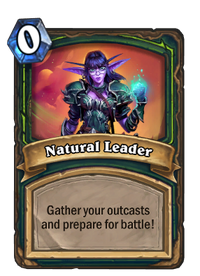 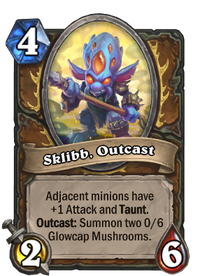 Gaining free +4 Attack each turn, the Apex Predator isn't pulling any punches here. The only thing that stands between you and its jaws is an unlikely little ally in Sklibb. Be sure to make good use of Sklibb's abilities by placing minions around him, to protect yourself and Sklibb.

As Zixor continuously attacks, even at your Taunt minions, damaging the boss directly isn't so much of an issue. Focus on removing the Lifesteal minions Zixor plays so that it cannot restore the Health it constantly loses from attacking your minions.

Aranna Starseeker
That huge beast... what is it trying to find in the mushrooms?
Zixor, Prime Predator
<Roar!>

Shalja, Outcast
A small creature hides among them! We can assist it.

Aranna Starseeker
That thing is gone now, little one. Are you alright?
Sklibb, Outcast
<Sporelok chatting noises>
Aranna Starseeker
I... don't know what you said, but you should come with us. It isn't safe here.

What a curious language.

Strange little creature. The explorers know of this race - "Sporelok."

Aranna Starseeker
Little one, you too may join us.
Shalja, Outcast
My lady, what? He is... fungus!

Zixor is original to Hearthstone. He is a warp stalker.