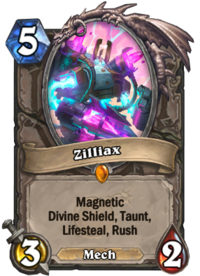 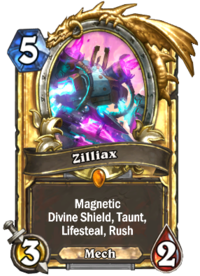 Everything but the kitchen sink. Oh wait, there's one on his back.

Zilliax is a legendary neutral minion card, from The Boomsday Project set.

Zilliax can be obtained through The Boomsday Project card packs, or through crafting.

Zilliax is packed with keywords, making it like a defensive version of Al'Akir. Although its stats are lacking, on its own it is effectively a 3-damage removal with healing that leaves a 3/2 with Taunt on board, and although its Health is too low to survive more than one hit, if the opponent doesn't have removal it will double up the healing. Zilliax's combination of keywords make it an extremely flexible, all-purpose card for any midrange or control decks, even ones that don't utilize any other Mechs.

Zilliax is even more effective if it's Magnetized to another Mech. The higher the Attack, the better the removal and healing and the higher the Health the longer it can make use out of its Taunt/Lifesteal combo. If the Mech does not have summoning sickness anymore, you could even Magnetize Zilliax and hit the face with it, leaving a high-statted minion with Divine Shield, Lifesteal and Taunt, usually locking out a short-term aggressive plan for the opponent.

Zilliax can be combined with Valeera the Hollow, using Death's Shadow to create a second copy for extra versatility. You can combine both Zilliaxs together for a burst of 6 damage and healing, or split them for 3 to two targets.

Zilliax is unique to Hearthstone. It is Dr. Boom's personal bodyguard.[1] It apparently regularly develops self-awareness and plots against its boss, and all organic life for that matter, resulting in routine reprogramming.