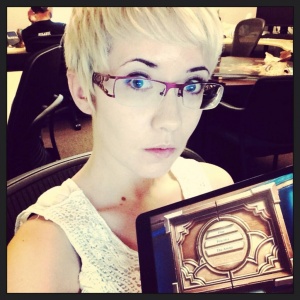 Zeriyah's icon on the official forums

Christina Sims, better known as Zeriyah, is a former Blizzard employee, Community Manager and Community Team Leader for Hearthstone.[1] She is the "voice for the players to the devs" as well as acting to relay information from the devs to players.[2] She is active on Twitter and the official forums, and along with Daxxarri is responsible for writing the official Hearthstone blogs.[3]

Sims is a noted cosplayer, having won first place in the 2010 BlizzCon costume contest as the female monk from Diablo III.[4][5] In previous years Sims had reached the finals with costumes representing World of Warcraft characters.[4] In 2012 Sims was made Brand Ambassador for Cryptozoic Entertainment[5] (producers of Hearthstone's precursor, the World of Warcraft Trading Card Game), and on May 17th 2013 joined Blizzard to become Hearthstone Community Manager (CM), replacing Phenteo, who had been the Hearthstone CM until then.[2] When the Hearthstone community team expanded, Sims was later announced Community Team Leader.

She left Blizzard in February 2019 sackings.