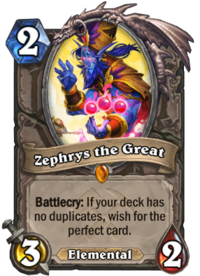 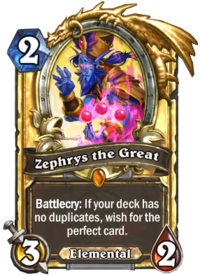 Battlecry: If your deck has no duplicates, wish for the perfect card.

"Of course it's perfect, you're just not seeing how to use it."

Zephrys the Great is a legendary neutral minion card, from the Saviors of Uldum set.

Zephrys grants the wishing player a card from a selection of three cards, from the Basic and Classic sets, to help turn the tide of battle in the player's favor. The selection of cards is based on what is best for the current game state for the player, as determined by an internal algorithm.

Of all Hearthstone cards, Zephrys the Great required the most development work and the largest team effort to design.

Zephrys the Great can be obtained through Saviors of Uldum card packs, through crafting, or as an Arena reward.

Zephrys is an incredibly powerful card that can save you from a bad situation, kill priority targets, generate value for later turns, or create lethal. Generally, you should save Zephrys for when you have no other good plays. Zephrys will always be an efficient play, so it's a good idea to wait until he's your only efficient play. When you do play Zephrys, it's a good idea to play out your other cards first to get to a desired level of mana remaining, then play him to persuade Zephrys to give you cards at or below that mana cost (factoring in the cost to play Zephrys of course).[88] To find out what Zephrys likes to offer you in various scenarios, the only way to find out is to play Zephrys a lot for yourself to see what he likes in different situations.

Since Zephrys gives you a choice between three cards, you still have to judge which of his options will be the best. For example - at three mana remaining he may give a healing spell like Holy Light, a removal spell like Deadly Shot, and a Mountain Giant which is currently playable. It's up to you to decide which path will provide the best value currently and on later turns.

Pay close attention to what Zephrys is offering, especially if the options include direct-damage spells or cards like Windfury, Savage Roar, and Bloodlust. He may see a lethal that you didn't account for.

If you're attempting to gain lethal with Zephrys, be sure to use your burst damage first. Zephrys will not check the cards in your hand, so he won't count them as damage when searching for lethal.

Even if this wastes a lot of his value, Zephrys isn't a terrible play on curve. He'll generally offer 3-mana cards, making him a super-upgraded Jeweled Scarab. In particular, he'll almost always offer Animal Companion, Wild Growth, and Brightwing, three of the best 3-mana cards in the Basic and Classic set. He can also curve out later turns as well, offering fitting mana costs no matter when he's played. He also often offers Tirion Fordring in the lategame as a proactive play.

Be wary of Bomb Warrior, which can disable Zephrys' effect by shuffling multiple Bombs into your deck. Try to play Zephrys early if you can in this match up.

Since he has the same singleton condition, Zephrys is a natural fit for decks using Reno Jackson, Kazakus, Inkmaster Solia, Raza the Chained, Krul the Unshackled, Elise the Enlightened, Sir Finley of the Sands, Dinotamer Brann or Reno the Relicologist.

Zephrys doesn't always need to be included in singleton decks. Since his effect only cares about your current deck, he can be played at or near fatigue to make use of his Battlecry. This can allow you to find a finisher as an aggro deck or another piece of value in a long control match. This works especially well in combination with Chef Nomi.

Most of the powerful cards that Zephrys thinks about giving to the player are listed below:[b]

Cards that may or may not be offered

Cards that are not offered or don't seem to be offered

"Previously, Zephrys valued Deathrattles as summoning a minion with stats equal to the difference in stats between the minion's base stats and the expected stats of a vanilla minion at that mana cost.

Now, instead of evaluating it as summoning a minion, it does something more generic, of adding 'that much value' to the opponent's board. In practice, this produces about the same results, except without the occasional card offered to deal with that extra summoned minion (which doesn't exist)."

Summon
Your wish is my suggestion.
Attack
Alakazoom![114] / Alakazam!

With the League of E.V.I.L. and its crew of calamitous lackeys, the League of Explorers equipped with archaeological artifacts, and the mystical mummies and monsters of Uldum, the desert sands have never hosted such a party of powerhouse prestidigitators and mischief-makers. Among those most powerful stands Zephrys the Great. While at a glance most would see nothing but a mild-mannered medium, Zephrys the Great is capable of divining and manifesting precisely what is needed in any given scenario.

Once this dune-dwelling diviner is played, the state of the game will be carefully analyzed and Zephrys will attempt to conjure exactly what you need to swing the game back in your favor or clench a decisive victory![115]

Unique to Hearthstone, Zephrys is a djinn.

A djinn is a type of powerful air elemental that can be found in Skywall. They made their first appearance during World of Warcraft: Cataclysm.

Most djinn in World of Warcraft are powerful lieutenants of Al'Akir, though a minor one has also appeared trapped in the Magical Brazier inside the Vortex Pinnacle. A legend among the tol'vir tells of a wicked djinn whom the Ramkahen sought to destroy. In an attempt to prevent his own death, the djinn tried to transfer his spirit into the body of a monkey. He was slain right in the middle of the transference, and only a fraction of his essence had moved over - only enough to possess the monkey's paw.