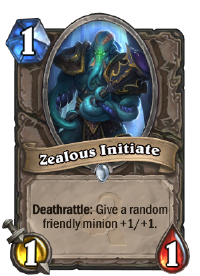 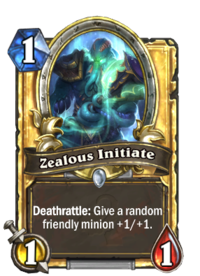 Deathrattle: Give a random friendly minion +1/+1.

Ok, Initiate. You need to settle down and do your job. In this case, that means die so someone else can get a minor buff.

Zealous Initiate is a common neutral minion card, from the Whispers of the Old Gods set.

Zealous Initiate can be obtained through Whispers of the Old Gods card packs bought through the ingame Shop, purchased online from the Battle.net shop, or through crafting.

The lower-cost version of Anubisath Sentinel; this card works well in Zoo decks, decks that rely on large numbers of low-cost minions, and efficient trades.

If played with a "sticky" minion (that needs to be attacked at least twice), like Argent Squire or Possessed Villager, that minion is very likely to receive the +1/+1 buff, which helps to gain control over the board early in the game.

Zealous Initiate may retroactively be a k'thir, a new Old God-affiliated race introduced in World of Warcraft: Battle for Azeroth.