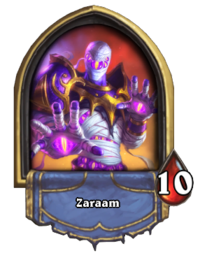 Zaraam grows in strength the more his minions suffer.

Zaraam is a boss that can be encountered initially in Chapter 3 of Tombs of Terror. After completing Chapter 3, this boss encounter will be available in any chapter.

Special note: boss appearances are not uniformly distributed and Zaraam seems to be the rarest of 7th floor encounters. [1]

Zaraam starts off weak, but becomes more powerful over time due to building up both his own Hero Power and C'Thun. He also has Taunt minions and cards that destroy friendly minions, so he will inevitably strengthen his own Hero Power with their deaths. If he plays Usher of Souls, remove it as soon as possible, since the minions' deaths will strengthen both Zaraam and C'Thun. Try to build up your board and deal as much damage to Zaraam's face as possible.

Zaraam
The plague has awakened a new nightmare...

Zaraam
Nothing you say can hide your failure.

Zaraam
Chaos unfolds.
Let pain devour reason.
The plague consumes all.
You brought this upon yourself.

Zaraam
Fools lament, but plagues bring profit to the wise.
I welcome the tide of madness... obviously.
The plagues come one by one, and then—the end.

Send forward the armies of chaos.

Yes. This one got it right!

Yes, pain is the word I would use too.

Blessings cannot save you.

Zaraam
Your deck betrays you...

Zaraam
You sought an illusion from the beginning.

Zaraam is unique to Hearthstone. He is an ethereal transformed by the Old God C'Thun, now becoming its servant.