You Must be This Tall to Brawl 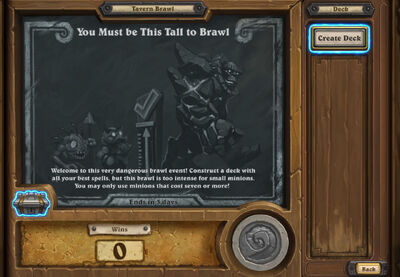 "Welcome to this very dangerous brawl event! Construct a deck with all your best spells, but this brawl is too intense for small minions. You may only use minions that cost seven or more!"

You Must be This Tall to Brawl is a Tavern Brawl. It debuted on March 30, 2016. For exact times, see the schedule.

This Brawl sees players creating their own custom decks using any class. However, minions with a mana cost less than 7 cannot be included in decks.

This Tavern Brawl is more about bypassing its deckbuilding restrictions than going along with them. Any card that has the potential to put a minion onto the battlefield before turn seven is disproportionally powerful. Mountain Giant and Frost Giant are prime examples that can be used by any class. However, Priests, Paladins and Druids are best at "cheating" minions into play.

Another valid strategy is to forego minion combat altogether, focusing only on defeating the enemy hero through spell damage or weapon attacks. Mages, Warriors and Shamans are very good at this.