For the minion of the same name, see Yogg-Saron, Hope's End.

Yogg-Saron, Hope's End is a hero that the player can pick in the Battlegrounds game mode. 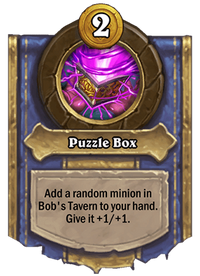 Yogg-Saron's Hero Power can be put to work right on turn 1 to provide yourself with a powerful starting minion and a spare gold to refresh with, which can be used to find better targets to recruit with your Hero Power on following turns. Its utility wears off in the late game, when you're less likely to buff the minion that you want and the buff itself is less impactful. As such, one should take advantage of the powerful early game that Yogg-Saron provides to quickly level through Tavern Tiers and find a build-around minion before the Hero Power becomes useless.

As you would with Dancin' Deryl, you can manipulate which minion you recruit with your Hero Power in lower tavern tiers by manually buying the other minions and selling them. However, this is not recommended as this strategy is much weaker here than it is with Dancin' Deryl.