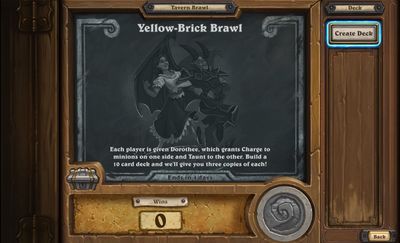 "Each player is given Dorothee, which grants Charge to minions on one side and Taunt to the other. Build a 10 card deck and we'll give you three copies of each!"

Yellow-Brick Brawl is a Tavern Brawl. It debuted on November 2, 2016.

Based on the Crone encounter from One Night in Karazhan, all matches in the Brawl are played on the Karazhan battlefield.

Additionally, Yellow-Brick Brawl was one of nine Tavern Brawls featured as part of the 207th Brawl, The 207th Brawl Spetacular!.

This Brawl sees players recreating the Crone encounter from One Night in Karazhan, with each player starting with a special Dorothee minion on their board, granting Charge to minions to Dorothy's left, and Taunt to those to her right. Players use custom constructed decks, of any class, containing 10 cards only (with a maximum of 1 copy of each card). Upon entering the Brawl each deck is made up to 30 cards, featuring 3 copies of each chosen card. Both players start with 30 Health and 10 Armor. 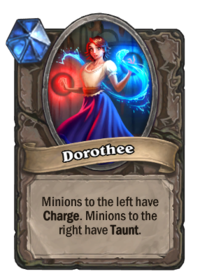 Stats and card text are most important here. Most minions that already have Charge or Taunt will not pull their weight, while ordinary cards like Pit Fighter, Boulderfist Ogre, and even Ice Rager become much scarier when Charge is included for free.

Aside from Dorothee's effects, the deckbuilding rules for this Brawl are a feature in themselves, making some unusual plays possible, especially combos and those involving legendaries (normally limited to one copy per deck). The bonus 10 Armor each hero starts with however makes direct-damage spells like Mind Blast less viable.

Some staple cards are usable in most strategies:

Warlock is one of the most powerful classes in this brawl.

A freeze mage strategy is hindered by the additional 10 armor, but can work.

The standard Wild Growth and Innervate plays become very strong this Brawl due to the chances of drawing several copies of each card. This then allows the druid to not only put high-cost minions into play several turns early, but to immediately attack with them. Kel'Thuzad can allow the druid to trade their minions without penalty.

Not a common class in this brawl, but cards that provide synergy with Charge and Taunt, such as Warsong Commander or Bolster, have considerably added value.