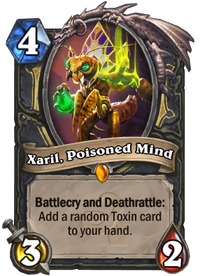 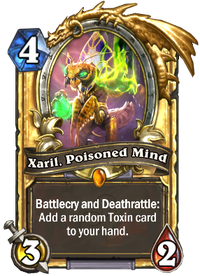 Battlecry and Deathrattle: Add a random Toxin card to your hand.

It's basically your own fault if you go around drinking weird green potions handed out by creepy mantid dudes.

Xaril, Poisoned Mind is a legendary rogue minion card, from the Whispers of the Old Gods set.

Xaril, Poisoned Mind can be obtained through Whispers of the Old Gods card packs, or through crafting. 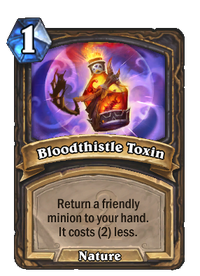 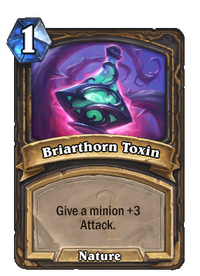 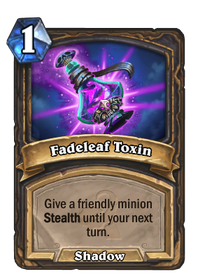 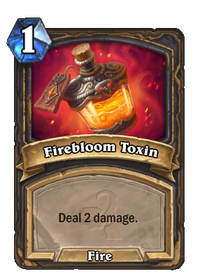 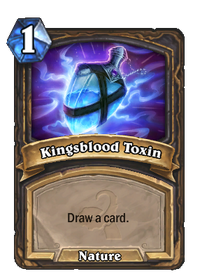 Xaril is a useful card for rogue decks built around spell-based cards like Arcane Giant, Malygos, or Yogg-Saron. The 1 mana spells are perfect for Combos or for triggering Gadgetzan Auctioneer, with the Stealth from Fadeleaf Toxin particularly useful for hiding them.

Summon
So many wonderful poisons.

Conversation with Hisek the Swarmkeeper:

Xaril's Toxin cards represent poisons made with (or at least named after) various herbs found in Azeroth - Briarthorn, Bloodthistle, Fadeleaf, Kingsblood and Firebloom. These spells are all original to Hearthstone in name, and in many cases also in their effects.

Bloodthistle in World of Warcraft

Bloodthistle is an unusual herb found only in the blood elf starting area Eversong Woods. It can be consumed by blood elves to increase their spell power. The herb does not feature in any recipes, and has no use in herbalism. Xaril's use of the herb in the Bloodthistle Toxin may be the first known bloodthistle concoction. Its effect of removing a minion from the battlefield may refer to the dazed state in which users of bloodthistle are often left, similar to Sap.

Bloodthistle is a herb native to Eversong Woods. It grows in and around areas of blood elf magical activity (i.e. near buildings). It can only be used by blood elves to get a +10 to their spell power. No other races are able to consume the herb. After the buff fades, the consumer of the Bloodthistle will be afflicted with Bloodthistle Withdrawal for 20 minutes, which reduces Spirit by 5 from the lack of Bloodthistle. The buff stacks with all other buffs. The debuff can be cured by consuming more Bloodthistle (which delays the withdrawal), casting a mage's Ice Block, or activating a paladin's Divine Shield.

A frequent consumer of bloodthistle is called a "thistlehead", and looked down upon by common blood elf society. Selling bloodthistle seems also to have been outlawed in several places, such as Shattrath City. According to the Illidari blood elves, Eclipse Point is full of thistleheads. 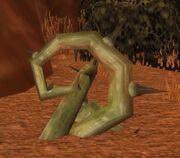 Briarthorn is a low level herb, often found at the base of trees in level 10-25 zones. It is one of the first herbs gathered by budding herbalists. Briarthorn is used in range of low level alchemy recipes, mostly involving healing. Its use in Briarthorn Toxin to increase Attack appears to be a first.

Fadeleaf is found across the middle and higher level zones of Kalimdor and the Eastern Kingdoms. It is primarily useful in potions which grant limited invisibility, or which grant the ability to see through others' invisibility, explaining the function of Fadeleaf Toxin.

Fadeleaf can be found almost exclusively under bushes and around other plants. Look for it in Arathi Highlands, Stranglethorn Vale, Swamp of Sorrows or Dustwallow Marsh. 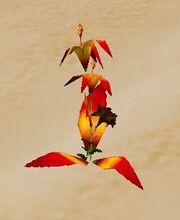 Firebloom is found in the higher level areas of Kalimdor and the Eastern Kingdoms. It features in a range of alchemical recipes ranging from spell power and intellect boosts to Philosopher's Stones, festival garments and Goblin Rocket Fuel. The function of Firebloom Toxin may refer to the herb's use in Oil of Immolation.

Firebloom can be found in hot regions, most frequently Tanaris and the Searing Gorge, but also in the Blasted Lands and the Badlands. It is used by the ogres there to spice up their otherwise bland meals.

Kingsblood can be found in low to middle-level zones across Kalimdor and the Eastern Kingdoms. It features in an eclectic range of recipes, from healing and stat boosts to absorbing Shadow damage. Its function in Kingsblood Toxin appears to add yet another use to this versatile herb. Interestingly, this effect also features in Kazakus' Kingsblood option.