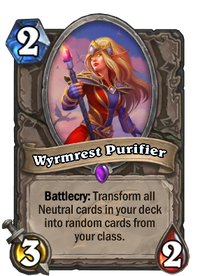 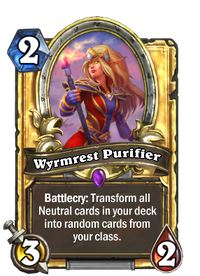 Battlecry: Transform all Neutral cards in your deck into random cards from your class.

She keeps your deck classy.

Wyrmrest Purifier is an epic neutral minion card, from the Descent of Dragons set.

This card is best used in Arena. Class cards are generally higher quality than neutral cards, and you have an increased chance to draw Legendaries and spells. In constructed, the effect is far too weak and random to see normal play.

Wyrmrest Purifier can be used with Lightforged Zealot and Lightforged Crusader to run neutral cards and still make use of their powerful effects.

Wyrmrest Purifier can be used to clear disruptive cards inserted into your deck by the opponent, such as Bomb, Corrupted Blood, Albatross, Weasel Tunneler and Darkness Candle, or neutral cards affected by Psychic Scream. Nerubian Ambush! is an exception to this, as it's considered a Rogue class card. 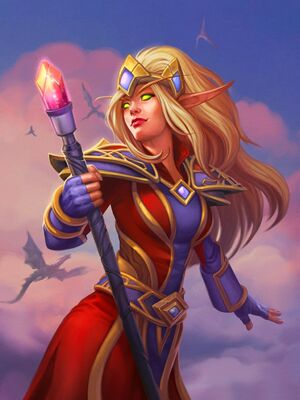