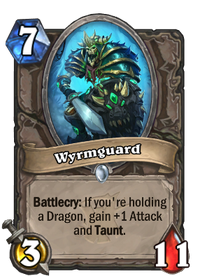 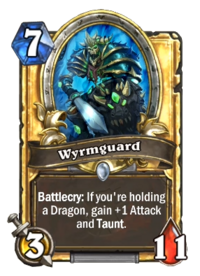 Wyrmguard is an common neutral minion card, from the The Witchwood set.

Wyrmguard can be obtained through The Witchwood card packs, or through crafting.

This card is a very durable Taunt minion for Dragon decks; it's effectively a 7-mana Sleepy Dragon with only 1 less Health. It's very good at fending off smaller threats and can survive a hit from at least one big minion, while also having protection against Priests at 4 Attack; however the card's poor when it's Battlecry not activated, since 3 attack value is not enough to trade late-game minions.

This is a below-average card in Arena, since you won't be able to activate Wyrmguard's battlecry consistently, resulting in a minion that trades poorly.