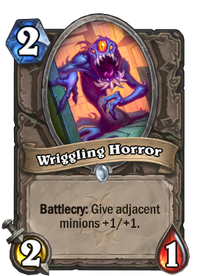 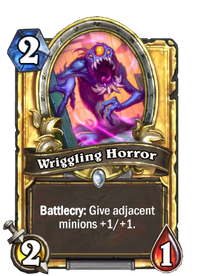 Created to scare. Born to wriggle.

Wriggling Horror is a common neutral minion card, from the Madness at the Darkmoon Faire set.

Wriggling Horror can be obtained through Madness at the Darkmoon Faire card packs, through crafting, or as an Arena reward.

Wriggling Horror synergizes perfectly in token/aggressive decks that aim to keep board presence. You can also use it to buff a single minion in a pinch.

Wriggling Horror is a fleshbeast.

Little is known about fleshbeasts, though they tend to inhabit foul places such as the Fetid Pool of Shadowmoon Valley and Access Shaft Zeon in Netherstorm. They are apparently parasitic, as evidenced in Access Shaft Zeon (where they inhabit the bodies of dead blood elves) and the Arcatraz (where adult fleshbeasts will try to infect you with their young, Protean Spawns).

Fleshbeasts carry within themselves a deep connection to the corrupting powers of the Old Gods. Like a pestilence, they spread the corruption wherever they tread, slowly twisting the very land to their form.