Set in the Warcraft universe established by the earlier real-time strategy (RTS) games Warcraft, Warcraft II and Warcraft III, World of Warcraft took the series to a new level with an immersive, persistent, explorable three-dimensional world, receiving universal acclaim upon its release and winning several awards.

With a one-time record of 12 million subscribers, World of Warcraft currently holds the Guinness World Record for the world's largest and most popular MMORPG. Its popularity has declined in recent years, but its final reported figures of 5.5 million subscribers in October 2015 still place it as the world's most subscribed MMORPG.

Hearthstone of course has its roots in the Warcraft universe. Over the course of its expansions, World of Warcraft has played a huge role in creating and developing the world, creatures and heroes of Azeroth. Almost every spell, minion, item and location found in the original Hearthstone was first found somewhere in World of Warcraft. As Hearthstone continues to grow, original characters and lore are becoming more common, but even these have their roots in the earlier games. 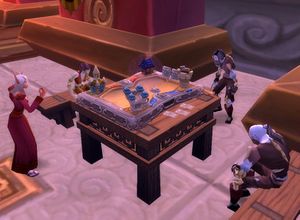 Horde NPCs in World of Warcraft enjoying a game of Hearthstone 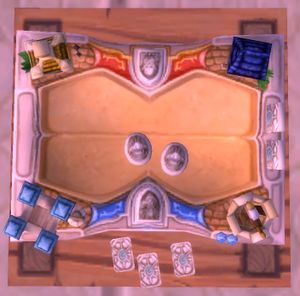 The in-game board from above; compare actual Hearthstone screenshots

One possible avenue for the eventual introduction of cross-play came with WoW's Patch 5.4.0, when two full-sized Hearthstone boards were added to each faction's shrine in the Vale of Eternal Blossoms. These detailed, three-dimensional sets come with cards, mana crystals and even a tiny gryphon on the Stormwind map used by the models. NPCs can be found playing the game from nearby benches and spectating, apparently discussing the game in progress and occasionally cheering the players on. No moving parts are involved, although every so often a small Arcane Explosion occurs above the game board (a spell found in the game itself). Players are free to sit on the benches around unoccupied boards, with some roleplayers including games of Hearthstone in their WoW characters' activities. Some have even begun taking their WoW characters over to Hearthstone for some in-character fun with their roleplaying friends and guildmates.[2][3]

To mark the release of Hearthstone, on March 11th 2014 the Hearthsteed mount was made available to World of Warcraft players as a reward for winning three games in Hearthstone's Play or Arena modes. As a free-to-play game, this served to encourage WoW players to try Hearthstone and marked the first significant and rewarding crossover between the two games.

The first Hearthstone to WoW crossover promotion came in March 2016 with the release of Lady Liadrin, a paladin alternate hero who can be unlocked through raising a character to level 20 in World of Warcraft. With previous alternate heroes requiring purchase with real money, this was a significant departure from tradition, and provides substantial reward for an equally substantial investment of time in the latter game (although not money - it is possible to reach level 20 using the game's free Starter Edition).

Liadrin was followed shortly by another alternate hero, Morgl the Oracle, who appears in Legion as a minor character. Morgl is original to Hearthstone, although he was first seen by players in the beta test of Legion prior to his debut in Hearthstone, causing some to believe he was originally a World of Warcraft character. The same expansion also saw Sir Finley Mrrgglton added as a quest-giver in Stormheim. The two therefore share the honour of being the first Hearthstone characters to be added to World of Warcraft, with both notably being murlocs. The third Hearthstone original character to be added to World of Warcraft was yet another murloc, Giantfin, appearing to confirm the game's unique position as champion of the race.

The developers have discussed the possibility of adding further crossover in the future, such as Hearthstone card packs dropping from WoW bosses. More recently, changes to the way WoW Tokens are bought in World of Warcraft may allow players to trade in-game gold from that game for Battle.net balance, which could then be used to buy Hearthstone packs, providing an effective means for players to earn Hearthstone cards through playing World of Warcraft. 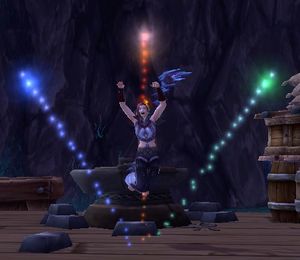 The Garrison also features the special Hearthstone Tournament follower mission, which sees the follower doing battle with "Mighty Zoo Lock", "Tricksy Miracle Rogue" and "Powerful Control Warrior". The mission rewards two items: firstly the Hearthstone Strategy Guide, which grants the Hearthstone Pro trait, turning the chosen follower into a "master tactician, and a must-watch", granting an additional 35% experience gains to the party; and the Autographed Hearthstone Card, a toy which allows the player to simulate acquiring a new Hearthstone card - although no actual item is generated. The item also has the flavor text "Signed by Trump and Reckful. Not too shabby." Subsequent expansions have added a number of similar minor items, such as the Deteriorated Hearthstone Deck, a junk item with the description "All you can discern from the faded cards are images of trees with arms and small green humanoids.", and the Golden Hearthstone Card: Lord Jaraxxus, a toy with the text "Use: Destroy your hero and replace it with Lord Jaraxxus." The latter epitomises the recursive relationship between the two games, with Lord Jaraxxus gaining a second wave of popularity as a Hearthstone card long after his original appearance as a World of Warcraft raid boss, with this second incarnation serving in turn to inspire a tribute item in the original game some 8 years later.

The Demon Invasion event celebrating the arrival of Legion sees NPCs named Doomsayer appear in the capital cities, spreading word of the Legion's coming invasion. These are clearly modelled on the Doomsayer from Hearthstone, using the same outfit seen in the card art, with blood elves for Horde and night elves for Alliance (due to faction restrictions).[4]

A far more substantial tribute came in 2017 with the Un'Goro Madness micro-holiday, timed to celebrate the then-upcoming Journey to Un'Goro expansion. Set in Un'Goro Crater, the setting of the Hearthstone expansion, the event saw players fighting a number of elite bosses, each possessing various "Adapations", granting them special combat abilities. The Dino Mojo consumable dropped by each boss granted players special Adaptations, improving their stats.

The Hearthstone board model currently used in World of Warcraft appears to depict a battle between Jaina and Garrosh. It appears Jaina has the upper hand, with 2 minions on the board, and 3 cards left in her hand, while Garrosh has none of either. Jaina also has 2 mana remaining. Released prior to the introduction of limited turn time in Friendly Challenge mode, the game is apparently a duel, since neither player appears to be falling foul of the turn timer!

The developers for both games frequently discuss lore ideas for upcoming Hearthstone content. The Hearthstone team don't consult the World of Warcraft team on "a very detailed level", or ask for permission to run new ideas, but the two teams do sometimes swap ideas. For example, the character Patches the Pirate originated in a meeting between members of the Hearthstone team and members of the World of Warcraft story team.[5] Designer Peter Whalen states that there's "a good back and forth" between the two teams, commenting, "We're both exploring the same world, and we're doing what's best for our games".

Designers of both games have also at times added elements with cross-over in mind.[6] For example the designer who created the updated version of Rexxar and his pets featured in Warlords of Draenor did so partly with an upgraded version of Animal Companion in mind, even going so far as to suggest to the Hearthstone team how such a card might work.[6] Ben Brode explains:

"We constantly inspire each other. We have a good relationship with that time. Sometimes we’ll say, 'Hey, we’re working on this for an upcoming thing in case you want to use it,' and they’ll go, 'Oh, definitely, send us some concept art, and we’ll send it to our illustrators and incorporate that into our next thing.'

"It’s great. People are designing stuff in World of Warcraft hoping that we’ll make it into Hearthstone cards now. We do that all the time on our side. We design cool characters, and we’re like, 'Wouldn’t it be cool if someone put this into World of Warcraft some day?' We have this fun relationship where we talk back and forth and collaborate and see what makes sense."[6]