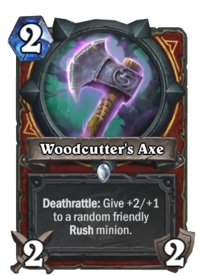 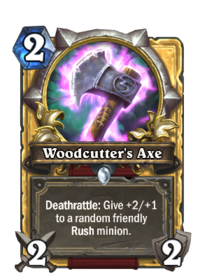 Deathrattle: Give a random friendly minion with Rush +2/+1.

It's a lumberjack's axe and that's ok.

Woodcutter's Axe is a common warrior weapon card, from the The Witchwood set.

If a minion gets Rush as a condition after being put in play, for instance, Scaleworm, it is still eligible to be buffed by a deathrattle of Woodcutter's Axe.

This card can be a very convenient early-game Removal tool for Warriors, clearing two small minions and boosting the power of a Rush minion. When played On curve with Rabid Worgen following, the Warrior can deal a staggering total of 9 damage to opposing minions within the first 3 turns.

It can be used as a card to draw with Countess Ashmore, letting you play at least one decent card to compensate for Countess's slow statline.