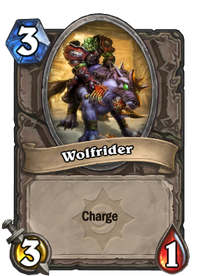 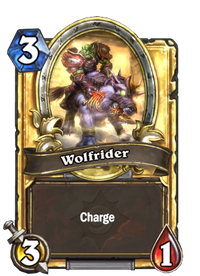 Wolfrider is a neutral minion card, from the Basic set.

Two copies of Wolfrider are automatically included in all players' collections upon unlocking the warrior class.

Two Golden copies of Wolfrider are a reward for raising a warrior to levels 59 and 60.

Wolfrider is uncraftable and cannot be crafted or disenchanted.

Wolfrider is a minion with good offence combined with the Charge ability. But with a pitiful 1 Health, the Wolfrider will almost certainly not live to attack again the following turn. Wolfrider is best when used to attack the enemy hero directly, allowing it to attack without being destroyed.

This card works well on its own, but can excel with buffs such as Abusive Sergeant's Battlecry or the warlock's Power Overwhelming.

As a vulnerable yet high Attack Charge minion, Wolfrider fits well in aggro decks that value speed and unstoppable damage over board control or more control oriented strategies. Wolfrider is very effective for getting in quick early damage, or a final burst to push the opponent over the edge.

Makes an ideal target for Faceless Manipulator to copy alongside buffs, due to its own low mana cost.

Raiders (or wolf riders) are traditionally wolf-riding warriors of the Horde and the orcish clans. Some orc raiders are capable of fighting on foot as well, supported by their dire wolves companions. Many other races and organizations raid for plunder but are not to be considered in the same way than in orcish culture.

Grommash Hellscream led the wolf riders of his Warsong clan against the Gorian Empire in bold hit-and-run attacks.

During the First War, the raiders were the most vicious of the Orcish hordes, these minions of Blackhand were trained to show no mercy. Riders of the darkwolves, these savage warriors used the speed and ferocity of their mounts to make them a deadly enemy. Faster than those who attacked on foot, they had perfected the tactics of tearing through columns of enemy soldiers like a hot wind.

As an organization, they were referred to as the Sythegore Arm and Blackhand himself was a prominent member. It is unknown whether the Frostwolf clan, also known for their proximity with wolves, were a part of the Sythegore Arm or a rival organization. The Frostwolves were exiled by Gul'dan for refusing to submit to demonic corruption and possibly didn't disband their raider corps.

When rumors that the wolf raiders of the Horde intended to betray Orgrim Doomhammer to Blackhand's sons: Rend and Maim, came to light, Gul'dan had Orgrim disband the vast majority of them, and subsequently replaced them with ogre enforcers.

The majority of the former wolfriders were then sent into the various arms of the grunt forces. Other raiders remained in Draenor; where they ultimately fell under the dominion of Fenris the Hunter and his Thunderlord clan. By the beginning of the Second War, raiders were thus extremely rare within the ranks of the Orcish Horde.

After many years of inactivity, the young Warchief Thrall decided to create a new generation of wolf riders. These mighty warriors carry hefty warblades into combat and rely greatly upon the cunning and ferocity of their faithful dire-wolf mounts to defeat their enemies.

Thrall's head of security, Nazgrel, was one of the most prominent member of this new generation of raiders. It is possible that the return of the Frostwolf clan itself under the banner of the Horde gave a renewed presence to raiders during the Third War.

Raiders can also be found in the ranks of the other Hordes, such as the Dark Horde and Iron Horde. The mounted raiders of the Warsong orcs favor speed and maneuverability in battle — they move quickly, strike swiftly, and are away before their enemies know what hit them. 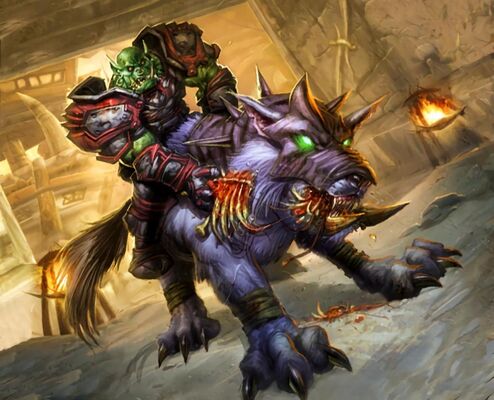