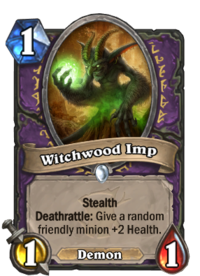 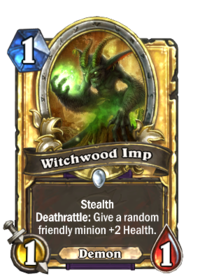 Witchwood Imp is a common warlock minion card, from the The Witchwood set.

Witchwood Imp has a similar effect to Blood Imp, but with a Deathrattle effect and that it can attack. This lets you have more control over the minion receiving the buff, but it has less immediate impact on play and less value over time. It works best in a Zoolock style deck, where it can be used to the deck's primary goals of trading efficiently and developing a strong board presence.

This card should not be played in decks running Bloodreaver Gul'dan or N'Zoth, the Corruptor, since this is a very low-impact minion to resummon.

Summon
This was not in my contract!
Attack
No, no, no!