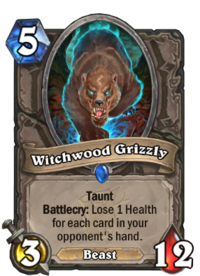 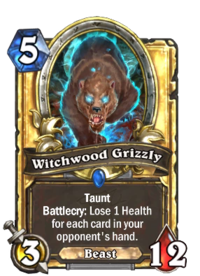 Taunt
Battlecry: Lose 1 Health for each card in your opponent's hand.

You know what they say about people with big hands? Small bears.

Witchwood Grizzly is a rare neutral minion card, from the The Witchwood set.

This card has immense base health, but its effectiveness is matchup-dependent. The opponent needs to have 4 cards or less for Witchwood Grizzly to be on par with its statline. In practice, this card works better against aggro decks that don't keep a large hand by the time you can play Witchwood Grizzly while having enough attack to fend them off. It's less effective against control, combo, and especially hand decks, which tend to hoard cards.

This card can be devastating for the opponent if it is summoned with all of its health, it can be resurrected with Witching Hour or Eternal Servitude to be a 3/12.

Witchwood Grizzly is also a great card to resurrect for Priest. Being able to double Divine Spirit and Inner Fire or Topsy Turvy to deal up to 48 damage. It also has strong synergy with Lady in White, giving it 9 extra Attack.

Hunters can Recruit this card with Kathrena Winterwisp, bypassing its Battlecry and giving you a powerful 12 health Taunt wall. Abominable Bowman can be used to resurrect this card, again with the full 12 health.

If you somehow suspect that your opponent holds this card in your hand, you can try to minimize the amount of cards you use.