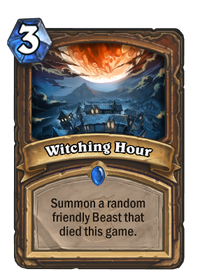 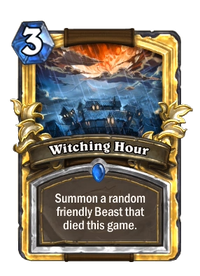 Summon a random friendly Beast that died this game.

The gates to the Gilnean pet cemetary MUST remain locked at all times.

Witching Hour is a rare druid spell card, from the The Witchwood set.

Witching Hour can be obtained through The Witchwood card packs, or through crafting.

As with many other Resurrection effects, this card is best run with one or few powerful non-Battlecry Beasts to maximize its effect. Good minions to use include Witchwood Grizzly, Hadronox, Charged Devilsaur, Amani War Bear, Winged Guardian, and Tyrantus. Unfortunately, this means that the card has anti-synergy with Spreading Plague and Malfurion the Pestilent as the tokens they summon are Beasts.

Watch out if your opponent plays Polymorph, Cornered Sentry, Hex, or even Tinkmaster Overspark. Since they summon beasts on your side of the board, they will have a chance to be resurrected instead once killed.