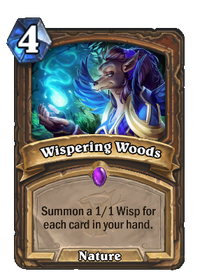 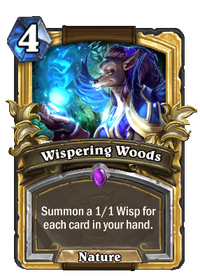 Summon a 1/1 Wisp for each card in your hand.

We didn't actually fire the guy who named Dark Wispers.

Wispering Woods is an epic druid spell card, from the The Witchwood set.

Wispering Woods can be obtained through The Witchwood card packs, or through crafting. 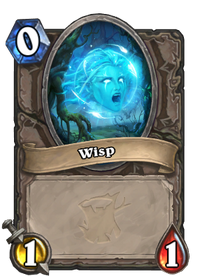 Wispering Woods is a powerful card for Hand Druid, combining with Witchwood Apple to flood the board with 1/1 minions as early as turn 3 with The Coin.

Wispering Woods can be played after playing powerhouse minions like Mountain Giant and Bewitched Guardian to force your opponent to choose between clearing the large minion or dealing with the smaller ones.

This card makes a formidable combination with Soul of the Forest, causing each of the Wisps to summon a 2/2 Treant upon death; this makes it much harder for your opponent to answer your board, and threatens a devastating Savage Roar on the next turn.