Wisp (Wisps of the Old Gods) 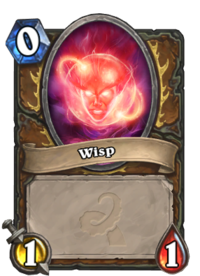 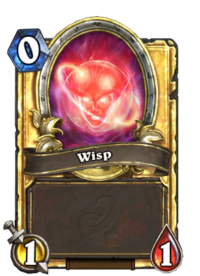 For the other minion of the same name, see Wisp or Wisp (Wispering Woods).

Wisp is an uncollectible druid minion card, summoned by Wisps of the Old Gods.

For more information, see Wisps of the Old Gods. 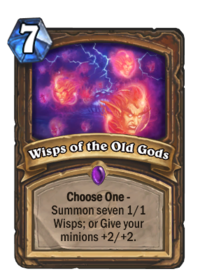 This card depicts a wisp driven to madness by the power of the Old Gods. As such, it could be considered a corrupted form of Wisp.

Wisps are fey nature spirits who build night elf structures and gather resources. Wisps have the power to detonate, causing a backlash of mana, and can become Ancients. Several thousand of them, known as the "Ancestral Spirits", gathered at the call of the Horn of Cenarius to Nordrassil to destroy Archimonde.

Wisps are the form taken by night elves after death, equivalent to other races' ghosts. Wisps are able to move much faster than ghosts, aiding night elf adventurers in returning to their bodies. According to legend, all wisps are the disembodied spirits of deceased night elves.