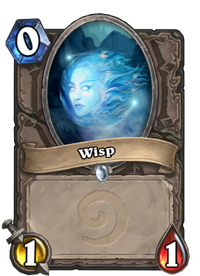 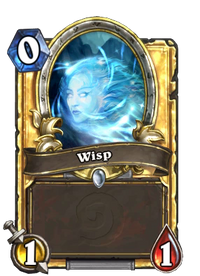 If you hit an Eredar Lord with enough Wisps, it will explode. But why?

For the other minion of the same name, see Wisp (Wisps of the Old Gods) or Wisp (Wispering Woods).

Wisp is a common neutral minion card, from the Classic set.

Wisp can be obtained through Classic card packs, through crafting, or as an Arena reward. 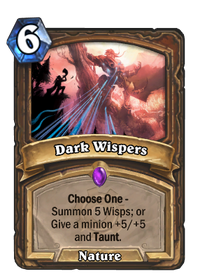 With its zero mana cost, Wisp is primarily valuable for use as part of rogue combos, providing a cheap way to activate Combo effects. It works well with cards like Edwin VanCleef and Questing Adventurer which are improved by playing cards. They can also be useful in combination with Hobgoblin to have two 3/3 minions for free.

Such combinations aside, the Wisp's low stats and lack of useful abilities generally make it less desirable than other low cost minion cards.

Wisp is directly inferior to Murloc Tinyfin, Desk Imp and Snowflipper Penguin due to its Murloc/Demon/Beast synergy, with the exception of your opponent playing Hungry Crab or Old Murk-Eye.

Wisps are fey nature spirits who build night elf structures and gather resources. Wisps have the power to detonate, causing a backlash of mana, and can become Ancients. Several thousand of them, known as the "Ancestral Spirits", gathered at the call of the Horn of Cenarius to Nordrassil to destroy Archimonde.

Wisps are the form taken by night elves after death, equivalent to other races' ghosts. Wisps are able to move much faster than ghosts, aiding night elf adventurers in returning to their bodies. According to legend, all wisps are the disembodied spirits of deceased night elves.

This is the original, uncorrupted version of Wisp.