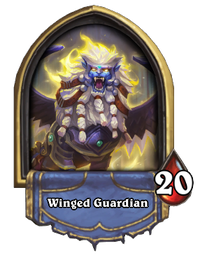 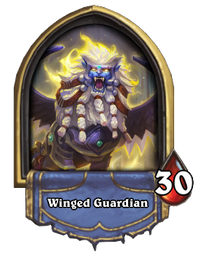 This great beast's roar bolsters allies and terrifies its foes.

For the minion from the Galakrond's Awakening set, see Winged Guardian.

Winged Guardian is a boss that can be encountered initially in Chapter 1 of Tombs of Terror. After completing Chapter 1, this boss encounter will be available in any completed chapter.

In World of Warcraft, the Winged Guardian is a flying mount purchasable from the Blizzard Shop.

When you take to the skies astride a blazing, eagle-winged lion, your comrades will know you mean business. Serious business. The majestic Winged Guardian is a titan creation from Uldum that was designed to protect Azeroth’s most ancient secrets.

Unearthed recently in an ancient tomb, this mighty winged lion may have once served one of the ancient Tol'vir princes.