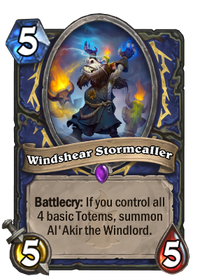 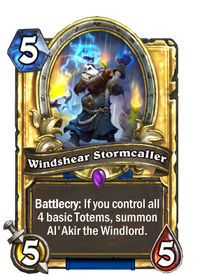 Battlecry: If you control all 4 basic Totems, summon Al'akir the Windlord.

Windshear Stormcaller is a epic shaman minion card, from the Kobolds and Catacombs set.

Windshear Stormcaller can be obtained through Kobolds & Catacombs card packs, or through crafting. 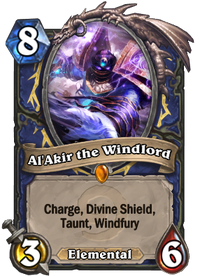 This minion's effect is extremely difficult to achieve, but the payoff is immense if you can pull it off, summoning Al'Akir for far below his cost as well as putting a 5/5 on board. To increase the likeliness of accomplishing this, add Totem-summoning cards like Kobold Hermit and Primal Talismans to your deck. Even if you can't manage to pull off summoning Al'Akir, its stats are not too bad to play on its own.

This card pairs with Totem Goliath, which making the conditional Battlecry much easier. It can even be played on curve with Lightning Bloom so long as you have a way to kill the Totem Goliath off first. Add in Heart of Vir'naal from Corrupt the Waters and you can summon two Al'akirs.

The Windshear were a kobold group that could formerly be found at the Windshear Mine and Windshear Crag in the Stonetalon Mountains. They appear to have vanished following the Cataclysm.

His summon and attack lines are a play on those of Al'Akir the Windlord.