Wildfest was a Hearthstone event that served as a celebration of the Wild format. It lasted from February 19th to March 11th 2018. Its main feature was the Wild Arena, which allowed cards from any set to be drafted in an arena deck. It also had themed Tavern Brawls.

During the event, the Tavern Brawl and Arena screens were decorated with the same vine overgrowth Wild menus are, although they lacked the darker color scheme. 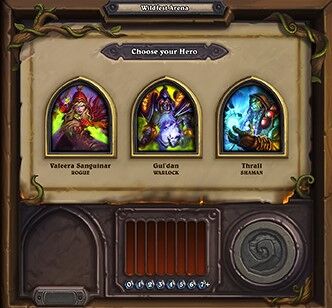 During Wildfest, cards from all sets could be drafted in Arena decks. This highly increased card pool made for a chaotic meta.

While any set was open to draft, all normal card exclusion rules still applied. For example, you couldn't draft C'Thun, Vicious Fledgling, or Hero cards.

Venture into the Wild[edit | edit source]

Main article: Venture into the Wild

This Tavern Brawl had players take control of a premade deck, closely based on a top Wild meta deck for each class. It was designed to give players a taste of Wild, even if they didn't have a full collection.

A variant of Heroic Tavern Brawl with a softer entry fee. It featured arena-like progression using constructed decks in the Wild format, as well as prizes. Players got their first run for free.