The Wild format, or simply Wild, is one of Hearthstone's three game formats in Play mode, the others being Standard format and Classic format. Wild format appears in game modes in which players are allowed to play decks without the deck restrictions of Standard format, allowing the use of cards from any card set. Wild format is used when playing in Wild mode, and is used for all adventures and in almost all Tavern Brawls.

The symbol for Wild format is an infinity symbol formed from thorny vines. This matches the general theme of branches and vines overgrowing on Wild interface elements, such as the collection manager when creating Wild decks, the player's Wild rank insignia, and the Play screen when Wild format is selected.

For new players, Wild mode will be locked away until they participate in a Tavern Brawl that includes Wild cards. They can also obtain a card which is not part of the current Standard format. Prior to this, the player will only be able to select Standard format, create Standard decks, and craft standard cards. 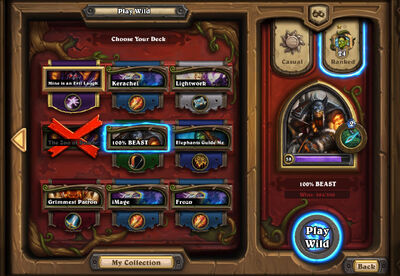 With cards from any set allowed, Wild format sees a far larger range of cards in play. As a result, more synergies and combinations are available, with a higher power level overall. The format is expected to steadily grow in power over time, outstripping Standard format, and allowing some very 'wild' combinations intentionally prevented in Standard (see Balance, below). This can also allow for a far greater variety of decks in play.

One intention for Wild format is to provide a break from the sometimes predictable meta of Standard format, similar to Arena or Tavern Brawls. While some players may simply prefer the format, others may find more interest in it as the latest expansion or adventure grows older, and the meta begins to grow stale.[1]

Initially only separated from Standard format by two major sets - Naxxramas and Goblins vs Gnomes - the difference between the two formats will grow over time as more sets are moved to Wild each year, with the latter eventually coming to include significantly more cards than Standard.

"The format where anything can happen",[2] while Wild will initially resemble Hearthstone exactly as it always has been, with an ever-increasing pool of cards to choose from, and competitive play focused on the Standard format, Wild format has the potential to become less balanced over time. The developers will "be paying more attention in Standard", with "a little bit of difference of tolerance" to balance problems between the two formats.[3] The removal of design space restrictions for the creation of new cards may also lead to some unusual card interactions, due to performance in Standard format being the priority for designers. However, the developers insist they will still pay attention to card balance in Wild format, and act if necessary to prevent it from becoming too unbalanced.[4][5][6][7]

A related issue is stagnation. While Standard format was created to ensure a fresh and regularly shifting meta, as the size of the Wild format card pool continues to increase, the format may in theory become increasingly stale, with each new set making a relatively small impact on the vast range of options available to players. Alternatively, the myriad number of possible combinations may result in an ongoing process of discovery in the format, with each new card finding numerous possible synergies and appropriate deck types. Weaker and more obscure cards may also find a place not feasible within the smaller Standard format selection, thus increasing the range of deck types and strategies far beyond those achievable in Standard.