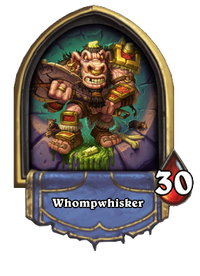 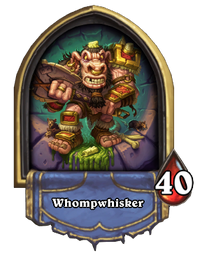 Whompwhisker is a boss that can be encountered during the Dungeon Run.

Like the Grim Guzzler, Whompwhisker's Hero Power causes both players to continuously recruit minions. Unlike the Grim Guzzler, you cannot build your deck to make the most of it. Mulligan for a low curve to increase the chances of Whompwhisker recruiting your costlier minions. If you do have higher-cost minions with Battlecry effects, take into consideration your ability to last long enough to actually play that minion as opposed to getting its free stats on the board. Whompwhisker will start putting down high-stat minions like Sleepy Dragon or Eldritch Horror, so play aggressively and try to keep hard removal around to deal with his threats.

Whompwhisker heavily favors clearing the player's board over damaging their health. This won't cause him to miss lethal damage, but it can allow the player to significantly delay him by playing minions that would otherwise be inconsequential.

King Togwaggle
Good ol' Whompwhisker is being angriest of kobolds.

Whompwhisker
Brawl!
Everybody... Fight!
Pile on!

Whompwhisker
What - WHAT? You fight dirty!

Whompwhisker
ME take candle. You take NOTHING.

Whompwhisker is unique to hearthstone. He is a kobold brawler who enjoys fighting.