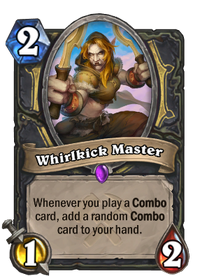 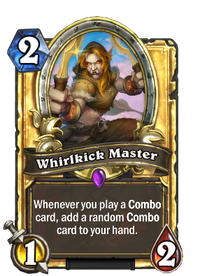 Whenever you play a Combo card, add a random Combo card to your hand.

Whirlkick Master is an epic rogue minion card, from the Saviors of Uldum set.

Whirlkick Master does not have great stats, it generates Combo cards. It is best to not be played for tempo but to be used later in the game when you have more mana crystals to be able to played generated Combo cards.

Even if you play your Combo card as a first card during your turn, it will generate other Combo cards to activate their Combo effects right away. Many combo cards have great effects for their low cost like Eviscerate, Cold Blood, EVIL Miscreant, Hooked Scimitar, Elven Minstrel, Jade Shuriken or even Edwin VanCleef which can be played right away or to be used later.

This can pair up with Shadow Sculptor which allows you to draw all the combo cards that are generated from Whirlkick Master.

Whirlkick Master is a sand troll.

Sand trolls are a subspecies of jungle trolls that dwell in the Tanaris desert. The subspecies arose by adapting to the beating of the hot Tanaris sun after being separated from their Eastern Kingdoms brethren in the Great Sundering.

A sand troll empire has never been formed - in fact the only known tribes of sand trolls are the Farraki (also known as the Sandfury) and Sandscalp tribes. Sand trolls mostly keep to themselves and attack all outsiders.