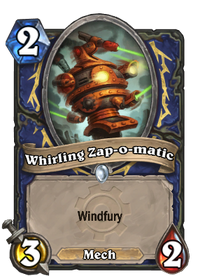 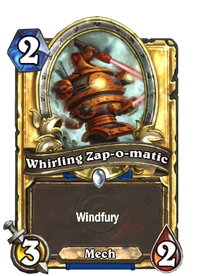 If you pay a little extra, you can get it in "candy-apple red."

Whirling Zap-o-matic is a common shaman minion card, from the Goblins vs Gnomes set.

Whirling Zap-o-matic can be obtained through Goblins vs Gnomes card packs, or through crafting.

This is a basic Windfury minion. However, unlike most minions with Windfury, Whirling Zap-o-matic has strong stats for its cost, making it a strong card to play even by itself. It gets even deadlier with combination with Attack buffs such as Rockbiter Weapon or Powermace. When not immediately dealt with, it can deal huge amounts of damage to the enemy hero very early on.

On top of its already good stats, its Mech type provides several synergy options, both in terms of improving the minion's stats, and using it to improve other cards, such as Tinkertown Technician or Cogmaster. It can become even stronger with a Magnetic minion applied to it.