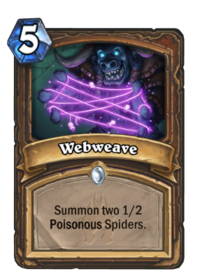 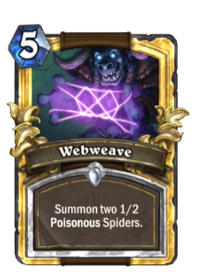 O, what a tangled web we weave, hoping spiders dodge the cleave.

Webweave is a common druid spell card, from the Knights of the Frozen Throne set.

Webweave can be obtained through Knights of the Frozen Throne card packs, or through crafting. 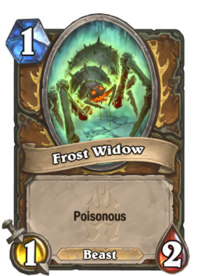 Webweave's best use is clearing away two large minions. It can ideally be seen as two Assassinates for the same cost as one, but it takes a turn before you can use them. However, your opponent can also remove the spiders before you can attack, either with spells or less desirable minions, or block them with multiple Taunt minions.

Keep in mind that Druid lacks strong removal options, especially in Standard, so this could be a viable choice.