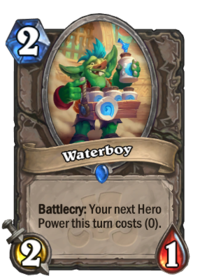 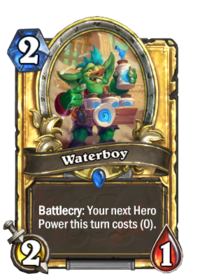 Battlecry: Your next Hero Power this turn costs (0).

Waterboy is a rare neutral minion card, from the Rastakhan's Rumble set.

Waterboy is primarily usable as a free 2/1 minion the next time you use your Hero Power. However, this card can be used for greater effect in a situation in which Waterboy's cost doesn't match that of your Hero Power, such as when your opponent plays Saboteur.