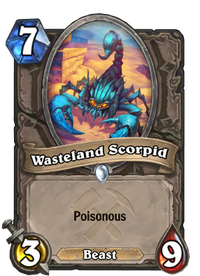 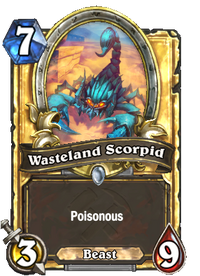 After they get to a certain size, it doesn't matter if they're poisonous or not.

Wasteland Scorpid is a common neutral minion card, from the Saviors of Uldum set.

Wasteland Scorpid can be obtained through Saviors of Uldum card packs, through crafting, or as an Arena reward.

Wasteland Scorpid is effectively a larger Maexxna with +1 to health, attack, and mana cost. Although its stats are overall poor, its Poisonous effect and survivability make it a formidable threat when securing a board you already control. This makes it a great Arena card as a lategame pick for midrange decks.

As a Beast with high health, Wasteland Scorpid works well with Houndmaster. It can also benefit from Scarlet Webweaver nicely.

The scorpid are gigantic creatures similar to scorpions and arachnathid. They measure an average of 3 ft. long.

They attack anything they perceive as a threat with their claws and stinger, which holds venom capable of killing creatures up to 100 times its own body weight. When stung, the venom causes rapid suffocation followed by violent seizures, and shortly after, death. Although tail venom of most scorpids is the most deadly, it is the bite of the diminutive scorpling that is the greatest threat. Some species also have venomous pincers. Hunting and killing scorpid is considered a rite of passage by the orcs.

Scorpids speak in complex clicking and chittering sounds, which sentient beings can actually learn and communicate with, such as Zathra.