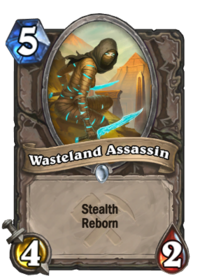 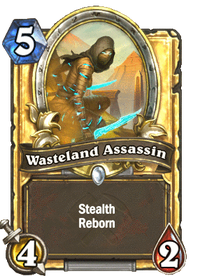 They'll never see me coming, what with my glowing body, eyes and daggers.

Wasteland Assassin is a common neutral minion card, from the Saviors of Uldum set.

Wasteland Assassin can be obtained through Saviors of Uldum card packs, through crafting, or as an Arena reward.

Wasteland Assassin has the same stats as Jungle Panther, but costs 2 more Mana and has Reborn. This is comparable to playing 2 separate Panthers in one card, compensating with poor stats for overall value over a longer payoff since it can deal a total of 8 directed damage.

Like all minions with Reborn, Wasteland Assassin works well with Transform effects and cards such as Wretched Reclaimer after its first death, transforming a meager 4/1 statline into a more threatening minion.

Summon
A place to hide.
Attack
Got ya!