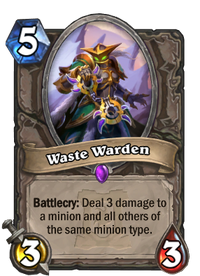 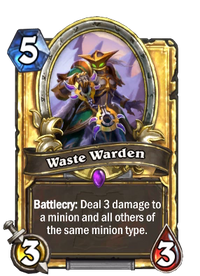 Battlecry: Deal 3 damage to a minion and all others of the same minion type.

Recycle that can, or you get the cuffs!

Waste Warden is an epic neutral minion card, from the Ashes of Outland set.

A decent tech card in heavy tribal metas, particularly ones with multiple decks using different tribes. Waste Warden is most powerful against Pirates, Totems, and Murlocs since they tend to have low health, but can help soften up any wide tribal board or clear token minions like Microbots and Flame Elementals.

Summon
A warden always hits her mark!
Attack
I am the law!

The mysterious wardens serve as the night elves' special police force in Kalimdor. They are elite members of the Watchers, the jailors, and marshals of night elf society, and the highest rank that can be bestowed on a Watcher. Maiev Shadowsong was first to be given the rank of warden, which she later awarded to a select few who had proven their exceptional fighting abilities, tracking skills, and tenacity.

Set apart from the militant Sentinels, wardens are usually employed as jailors, assassins, and bounty hunters. When loosed upon escaped criminals, wardens employ a number of supernatural powers that enable them to recapture their prey and mete out the night elves' justice. Wardens have a line of sight teleport ability called "blink," which they can use to outmaneuver even the quickest of foes. They notably wield umbra crescents and typical glaives. They also use owls for recon.