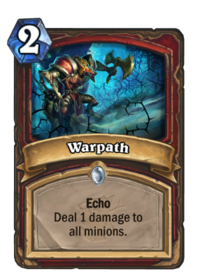 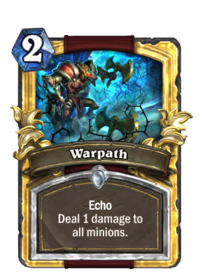 Echo
Deal 1 damage to all minions.

Warpath is a common warrior spell card, from the The Witchwood set.

Warpath can be obtained through The Witchwood card packs, or through crafting.

A single cast of Warpath is effectively a more expensive Whirlwind, making it inefficient in the early game. During the late-game, Warpath makes a powerful board clear capable of wiping out multiple medium-sized minions, akin to Flamestrike. It also has the advantage of versatility, letting you conserve mana when dealing with smaller minions. More situationally, Warpath can also be used to trigger on-damage effects such as Frothing Berserker and Acolyte of Pain multiple times.

Warpath shares its name with a Protection warrior honor talent in World of Warcraft: Legion that causes the warrior's Heroic Leap ability to also stun all targets for 3 seconds.