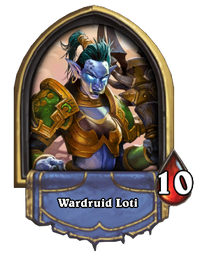 She and her raptors aim to prove the wild side is the winning side.

For the minion card of the same name, see Wardruid Loti

Wardruid Loti is a boss that can be encountered during the Rumble Run, if the player has not chosen one of the Druid Shrines. 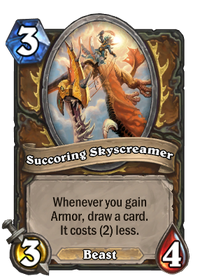 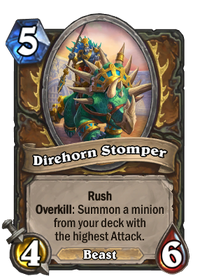 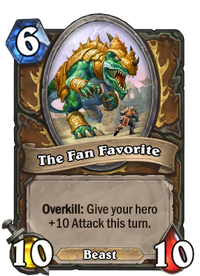 Wardruid Loti
Greetings - We smelled you coming.
Well Played - Naturally.
Thanks - The inner animal brings out the best in us.
Threaten - Let's finish dis. My pack is hungry.
Oops - A wild misjudgment.
Wow - It's all instinct.
Sorry - You should be.

Wardruid Loti
I will not forget that.
The circle of life...
You hate what you can't understand.

Wardruid Loti
My spirit never shatters.
Nature adapts.
We are a force of nature!

Wardruid Loti
Broken like your spirit.
All show, no bite. (vs. Mage)
Your shrine is a mere scratching post. (vs. Paladin)
Primal instincts are immortal. (vs. Priest)
Looks like you never got your land legs. (vs. Rogue)
You hunt flies. I hunt fools like you. (vs. Shaman)

Gonk will crush you!

Gonk grants me power!
I will NOT stop!
Survival of de fittest... and fastest.

Spirit of the Raptor

Raptors! To my aid!

Mark of the Loa

Never too many raptors.

Wardruid Loti
No force in this world can tame me.

Beloved by the youth of Zandalar, Wardruid Loti earned her place on the Zanchuli Council through the demands of the next generation of warriors and hunters. Some credit the decision of Gonk to allow the Zandalari the worship of many loa, not just himself. This progressive movement, championed in voice by Loti, aided in the resurgence of druidism as a cultural mainstay of Zandalar.

In Hearthstone lore, Loti serves as the champion of Gonk's Raptors, the druid team in Rastakhan's Rumble.

Loti keeps her distance from the other Rumble competitors, preferring the company of her dinosaur loa Gonk and other scaled companions. Druids will discover that she’s a master of shapeshifting and claw-to-hand combat.[1]