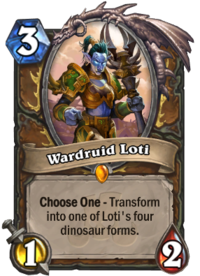 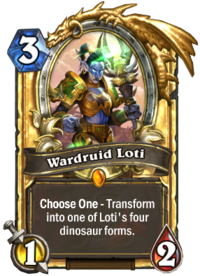 Choose One - Transform into one of Loti's four dinosaur forms.

For the boss of the same name, see Wardruid Loti (boss).

Wardruid Loti is a legendary druid minion card, from the Rastakhan's Rumble set.

Wardruid Loti can be obtained through Rastakhan's Rumble card packs, or through crafting. 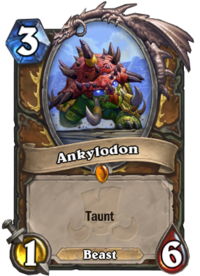 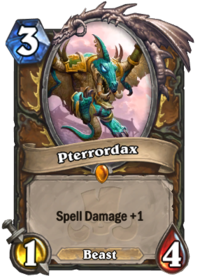 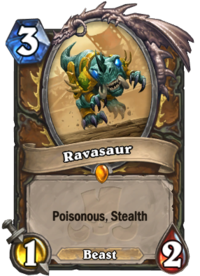 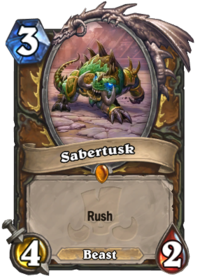 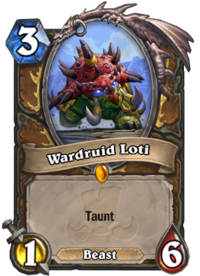 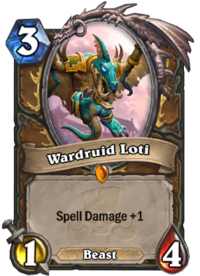 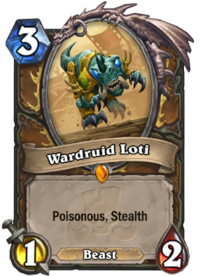 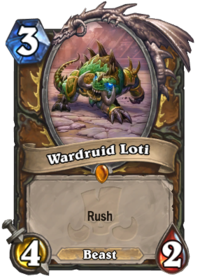 If played while in control of Fandral Staghelm or Ossirian Tear, all four Choose One options will be chosen, resulting in the below minion. 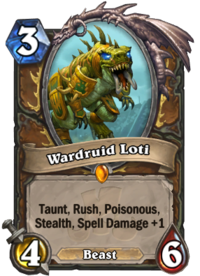 Wardruid Loti offers extreme versatility on one card. While individually the forms are rather below average, they can be used for all kinds of situations.

Her power jumps up several levels if you can play her with Ossirian Tear or Fandral Staghelm, creating an incredibly overstatted minion with several keywords attached. It also allows for strategies not normally possible like using it for hard removal with Poisonous and Rush or as a "passive" Spell Damage booster with Stealth.

Beloved by the youth of Zandalar, Wardruid Loti earned her place on the Zanchuli Council through the demands of the next generation of warriors and hunters. Some credit the decision of Gonk to allow the Zandalari the worship of many loa, not just himself. This progressive movement, championed in voice by Loti, aided in the resurgence of druidism as a cultural mainstay of Zandalar.

In Hearthstone lore, Loti serves as the champion of Gonk's Raptors, the druid team in Rastakhan's Rumble.

Loti keeps her distance from the other Rumble competitors, preferring the company of her dinosaur loa Gonk and other scaled companions. Druids will discover that she’s a master of shapeshifting and claw-to-hand combat.[1]

The four animal forms used by Loti are the same as several of the animal forms used by Zandalari druid player characters in World of Warcraft, each of which is based on a type of dinosaur commonly found on Zandalar and corresponds to the more traditional animal forms used by druids from most other races: ankylodon (Bear Form), pterrordax (Flight Form), ravasaur (Travel Form), and sabertusk (Cat Form).