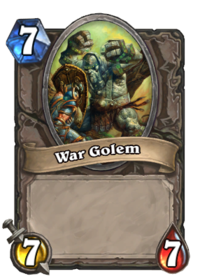 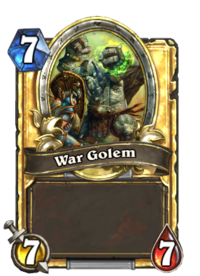 Golems are not afraid, but for some reason they still run when you cast Fear on them. Instinct, maybe? A desire to blend in?

War Golem is a neutral minion card, from the Basic set.

Two copies of War Golem are automatically included in all players' collections upon unlocking the rogue class.

Two Golden copies of War Golem are a reward for raising a rogue to levels 51 and 52.

War Golem is uncraftable and cannot be crafted or disenchanted.

War Golem is a costly, but powerful and sturdy creature. Its stats are well balanced and among the best for this cost, but as a trade-off it has no additional abilities.

War Golem is rarely seen in constructed decks, as its lack of any additional abilities means it struggles to compete for a slot against a variety of other options, such as Blazecaller, The Curator or Volcanosaur. Even among the Basic set, Boulderfist Ogre is generally preferable, as it has the same health and only 1 less Attack for 1 mana less, which incidentally allows it to dodge Big Game Hunter. In Wild format, War Golem is objectively worse than Dr. Boom, providing the same body for the same cost, but without the powerful Battlecry.

However, it sees some play in Arena, where its solid body-to-cost ratio can be beneficial to a deck lacking late-game cards.

Golems are huge elemental or mechanical entities, mainly in humanoid forms, that are built generally as guardians or protectors of a person, place, or thing. Usually composed of stone or metal, they are brought to life by the elemental magic infused inside them. Most usually have Golem Oil flowing inside them like blood, but some are also mechanical.

War golems in particular are a dwarven invention, and can be found in a number of areas including the Badlands. 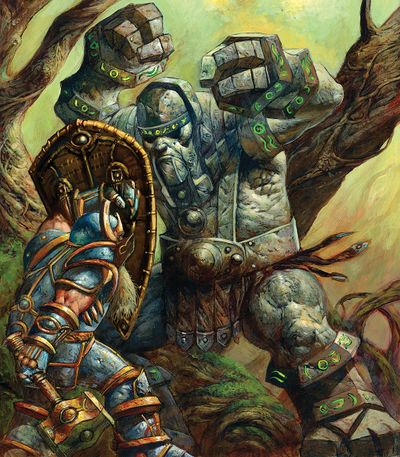