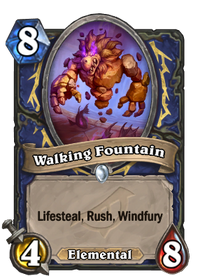 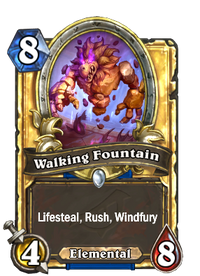 The weirdest part is that it doesn't have legs.

Walking Fountain is a common shaman minion card, from the Rise of Shadows set.

Walking Fountain can be obtained through Rise of Shadows card packs, through crafting, or as an Arena reward.

An incredibly efficient minion that can clear two medium-sized minions and restore 8 Health to your hero. Combines well with Rockbiter Weapon and Earthen Might for even more healing, albeit at the cost of 10 mana.

Due to having Rush, using Eureka! when this is the only minion in your hand can allow you to effectively cheat it out early for 2 less Mana, while still retaining the copy in your hand.

Walking Fountain is ostensibly connected to the famous Dalaran fountain, a wishing well located in the city's Eventide district. Notably, players can fish from the fountain in both the Wrath of the Lich King and Legion versions of Dalaran, with a chance to fish up a wide variety of lucky coins thrown into the well by some of Azeroth's most famous figures, such as Arthas Menethil, Fandral Staghelm, Jaina Proudmoore, Kel'Thuzad, Maiev Shadowsong, Medivh, and Sylvanas Windrunner. The coins all feature flavor text apparently reflecting the wishes made by the coins' owners when they first tossed them into the fountain.

Visually, Walking Fountain partially resembles a lion seal, apparently due to the lion seal statue that adorns the Dalaran fountain. It also seems to be accompanied by the small statues of frenzies, a type of carnivorous fish.

Among the World of Warcraft community, the Dalaran fountain is memetically known for messing with it's patrons wishes in a manner similar to a monkey's paw. Examples include Uther Lightbringer's wish for Arthas to be less reckless, and Archmage Arugal's wish to retire peacefully with some pet dogs.