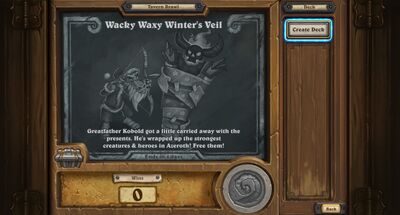 "Greatfather Kobold got a little carried away with the presents. He's wrapped up the strongest creatures & heroes in Azeroth! Free them!"

Wacky Waxy Winter's Veil is a Tavern Brawl. It debuted on December 20, 2017 and rewarded three Knights of the Frozen Throne card pack in place of the usual Classic card pack. For exact times, see the schedule.

This Brawl sees players doing battle using custom decks using any class. At the start of the game, four Large Waxy Gift are given to each player. When they die the opponent gets a legendary in hand that have their cost reduced by 3.

At Turn 7, 4 more presents will drop on each side of the board. If there are not enough presents to fit the board, then it will only drop as much as it can fill the board.

The reduced mana cost from the legendaries get from the Large Waxy Gifts makes them high priorities for attacking.

Since the Gift minions have 0 Attack, stat-switching effects like Crazed Alchemist and Reversing Switch can be used to destroy them immediately. Alternatively, you can use buffs on the presents to create board presence and defend them against the enemy. Because the board will often be full from the presents, AoE buffs like Bloodlust are extremely effective. Pilfered Power is extremely powerful in this Tavern Brawl as well.

While an early board clear like Doomsayer or Shadow Word: Horror can grab you the boxes very quickly, it also does the same for the opponent.

You can cheat your opponent out of presents by silencing them with Wailing Soul, returning them to your hand with Shadowstep, transforming them with Evolve, or even take them for yourself with Treachery.

Due to the high number of minions on the board on turn 1, cards that benefit from the presence of minions and minion deaths see high value, particularly Sea Giant and Lil' Exorcist.