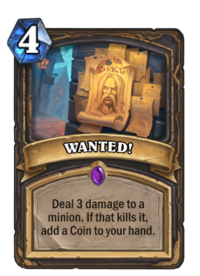 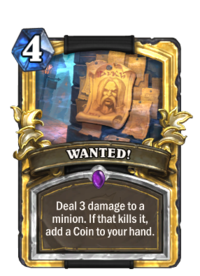 Deal 3 damage to a minion. If that kills it, add a Coin to your hand.

WANTED! is an epic rogue spell card, from the The Witchwood set.

WANTED! is at first glance lackluster, as it is basically 3 mana to deal up to 3 damage to a minion. However, the Rogue class is able to use Coins for greater effect than other classes can, as Tomb Pillager and Counterfeit Coin demonstrated. Though this card is abysmal removal for Rogues compared to Vilespine Slayer and Eviscerate, the extra Coin can be used to get extra draws from Gadgetzan Auctioneer in Miracle Rogue, activate Combo effects, and boost Edwin VanCleef.

As of The Witchwood expansion, Rogues right now have little use for this card, since the two main archetypes use either Baku the Mooneater or Kingsbane to beat opponents and don't need extra Coins. However, a Coin Rogue could be viable in the future.