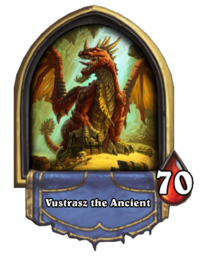 His vast treasure stores are for the taking... if you dare!

Vustrasz the Ancient is a boss that can be encountered during the Dungeon Run. 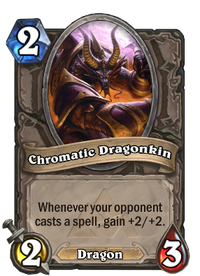 Vustrasz starts the battle in the possession of five Master Chests. While it may be tempting to break the chests to retrieve the treasure within, doing so causes Vustrasz's Hero Power to start doing damage. Therefore, it would be best for the player to ignore the Master Chests as much as possible, as it means that Vustrasz will be fighting with an effective two board spaces while his autocast Hero Power does no damage. That said, Vustrasz possesses several buff spells like Velen's Chosen and will use them on the Master Chests himself, allowing him to attack with them and forcing the player to eventually trade into it. Silencing the chests is a good tactic when Vustrasz has given his chests several strong attack buffs, as it will not count as destroying them. However, this will cause the chest to not give you any treasures, and Vustrasz can potentially give even more buffs to the previously silenced chests, so use your silences wisely.

The rest of Vustrasz's deck resembles a Dragon Priest deck with various board control tools. Lightbomb is its most dangerous boardwipe as it can easily destroy everything you control (especially if they're damaged through his Hero Power) while leaving his Chests intact.

If you do have to break open the Chests, plan around the damage you and your minions will be taking. The best treasures to be obtained from them can be Zarog's Crown and Wondrous Wand which can help you set up a board state with ease. Refrain from using the Wand of Disintegration during this fight unless in an emergency, as not only will it destroy the Chests and have his Hero Power do 5 damage each turn, but you will gain no treasures in return.

Note that taking control of the chests (e.g. via Scroll of Confusion or Cabal Shadow Priest) or returning it to boss' hand counts towards his Hero Power damage normally, as if a chest was destroyed. Similarly, if Vustrasz replays a Chest which was returned to his hand, or a Chest is spawned through the effect of Marin the Fox, his Hero Power will do less damage.

King Togwaggle
Are you to be taking the dragon's treasure? Oh, he gonna be SO mad...

Vustrasz the Ancient
I will take that into consideration.

Vustrasz the Ancient
Give it back!
Grasping child!
That is not yours!
Thief!
You will pay a price for your greed.

Vustrasz the Ancient
Marin the Fox! You dare return to this place?

Vustrasz the Ancient
These treasures, ancient and venerable. Here they will stay.

Vustrasz the Ancient is unique to Hearthstone. He's a red dragon who guards treasure underground. He had several running with Marin the Fox during Tale of the Fox and Up Comes Down.