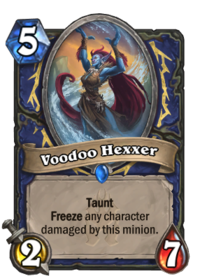 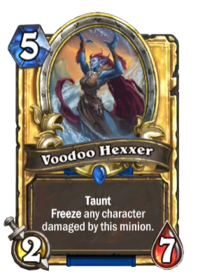 Taunt
Freeze any character damaged by this minion.

The Silver Hand recruits shuddered in terror when they saw the dreaded totem of the Hexxer: A tiny little snowman, impaled with pins.

Voodoo Hexxer is a rare shaman minion card, from the Knights of the Frozen Throne set.

Voodoo Hexxer can be obtained through Knights of the Frozen Throne card packs, or through crafting.

Voodoo Hexxer is a high health taunt that is very effective at slowing down an enemy attack. It will often require multiple minions to trade into it in order to kill it, and although it has a low attack value, the Freeze effect can be very effective at slowing down the game, even after this minion has died. The Freeze effect also has synergy with cards such as Ice Breaker and Moorabi, allowing for this card to generate additional value in conjunction with them. Voodoo Hexxer is also a good pick from Stonehill Defender against aggressive decks.

In Arena, Voodoo Hexxer is an average pick. The stats are a little low for the format, but some value can be gained out of the Taunt, and out of the freeze ability. This card has the potential to generate an advantage if your opponent has to attack several mininons in to deal with it.

Voodoo (once referred to as black magic) is a dark and powerful form of magic practiced by the shadow hunters, hexxers, and witch doctors. The trolls' use of mojo in their voodoo magic has long been established.

Hexer or Hexxer is a type of a caster. There are troll and saurok hexxers.